Originally posted on Twitter and syndicated to Daniel’s newsletter.

I’m writing in response to statements made publicly by Beth Seabolt, Elder of Menlo Church, at a town hall meeting on March 1st. These statements were discussed widely on social media yesterday, and two independent attendees of the town hall meeting attest to the accuracy of the transcripts.

As well as being perplexing, Seabolt’s public comments were both inaccurate and damaging. She should apologize for smearing Danny’s reputation, and misleading the congregation of Menlo Church. 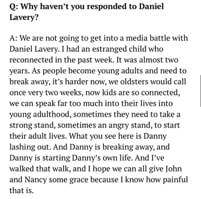 Seabolt is here answering a question concerning a statement Danny made on Twitter on February 2nd, in which Danny detailed the reasons for reporting his father’s conduct in respect of a church volunteer. In fact, Danny made direct report to Beth Seabolt herself, who, far from implying that he was taking “an angry stand” or “lashing out,” expressed her gratitude to his for having brought the Ortbergs’ disturbing conduct to the attention of the Elders of Menlo Church. She wrote:

Seabolt wrote to Danny several more times, each time affirming the seriousness of his report, and expressing gratitude for his whistleblowing. She wrote:

For Seabolt and, by extension, Menlo Church to now portray Danny’s actions as as merely the bravado of a “young adult” at the start of his “own life” is deeply puzzling as well as disgraceful. Danny is 33 years old and a highly respected professional in his field. Not a single one of his choices in this matter has been made out of anger, or “lashing out,” as Seabolt well knows. Indeed, were it not for Danny’s “lashing out,” neither she nor anyone at Menlo Church would even know that one of their volunteers believed themself to be treating their pedophilia with the explicit and sustained encouragement of the Ortbergs.

I also note that Seabolt’s remarks were phrased to avoid using any gendered pronoun to refer to Danny, leading to some awkward formulations: “Danny is breaking away, and Danny is starting Danny’s own life.” What Seabolt reveals with these evasions is that she cannot bring herself to use a masculine pronoun to refer to Danny - which perhaps provides a clue to what is motivating her otherwise inexplicable attempt to undermine his perfectly uncontroversial public statement.

In his statement, Danny reported John saying two things: (1) that being compulsively aroused by children is “like being gay,” and that (2) Danny and I lacked the standing to propose another plan to the volunteer than the Ortbergs’, because of our transitions. I was on that phone call too, and can confirm that these were precisely the positions that John Ortberg took. However, if John has since changed his mind, or the church elders find those positions “negative” or objectionable, there is an obvious remedy: the full restoration and affirmation of LGBTQ people and relationships –– pronouns, gay marriage, queer clergy, and all –– by the elders and staff of Menlo Church.

Meanwhile, I can only imagine the damage done by Seabolt’s fantasy that only Christ can save queers from suicide, punctuated by the hollow and condescending reassurance that “John loves gays and transgenders.” I hope LGBTQ members of the Menlo Church community, and their allies, will reflect carefully on these words.

I am not surprised, of course, that an evangelical church is covering up for its own abusers, nor that a church’s response to whistleblowers is to smear the reporter, nor that a church’s sweet words of support for queer and trans people mask a casually death-oriented fantasy. But I am disappointed, specifically, in Beth Seabolt, who presented herself to Danny as an honest broker, and someone with a capacity to seek justice, even against the commercial interests of the Ortbergs. I am disappointed, then, to see that she has stooped to this kind of smear tactic.

In his own remarks at the Menlo Town Hall, John Ortberg acknowledged, albeit half-heartedly, that his secret plan to treat someone’s pedophilia by covert immersion therapy under his own supervision was a “mistake.” Does he therefore also regret attempting to bully Danny into keeping his secret? And if so, will he offer a public apology to his son? Do the Elders of Menlo Church not think that the absence of such an apology is quite disturbing, in this context?